At last, we have it in our hands! To celebrate the 150.000 spectators of “Gente Bien. El musical” we have edited the disc with the music of the show. Everyone can enjoy now the 17 songs of this musical anywhere, anytime. The lyrics are inspired into the satiric play Santiago Rusiñol; Joan Vives composed the music and the musicians from l’Auditori de Barcelona play in the recording.

You can buy it in the box office of Teatre Coliseum at 6€ the whole disc, or buy it in itunes or amazon.

“Yesterday I saw Paquita Santesmases, the lady from flat 3, the one who was married to the solicitor but got divorced after he had an affaire with his secretary. Anyway, she told me that Francisco and his children want to go to the Theatre Coliseum to watch La Cubana’s new show in October… Didn’t you know that Paquita is going out with Francisco? Yes, Francisco, from the butcher’s. He is a widower with three kids; he joined the same painting course Paquita was doing at the community centre, and stroke here stroke there love appeared… The thing is, she asked me if we agreed on forming a group with them to go to the theatre. There’s already five of them, Rocío and Astrid, from the baker’s are also going with their boyfriends. As is my son Albert, who is going with Ruth, from flat 5 – they have been seeing each other for a few weeks now… – that’s right, Ruth from the students’ flat… She is very pretty and whenever I’ve run into her on the roof terrace when picking up the laundry she’s always seemed very nice. I hope it works out… After the thing with Leti, Albert has been a bit depressed… And he now looks much happier. ¡No, it’s not a date! ¡No! They’re not going on their own, his bike-shop buddies are also going with them… Very nice lads, yes, only, there is this one, Santi, who is a handful, he is always playing the field… Yes, yes, it’s understandable, they are young, they don’t know what they want.

The thing is… where was i? Oh, yes, Mercedes and Mila from the haberdashery are also going with three friends from aqua aerobics, and if we join them, we will be twenty-one… And the price is awesome. Its 23,76€ per person… ¡A bargain! ¡Come on, girl, it will be fun!” 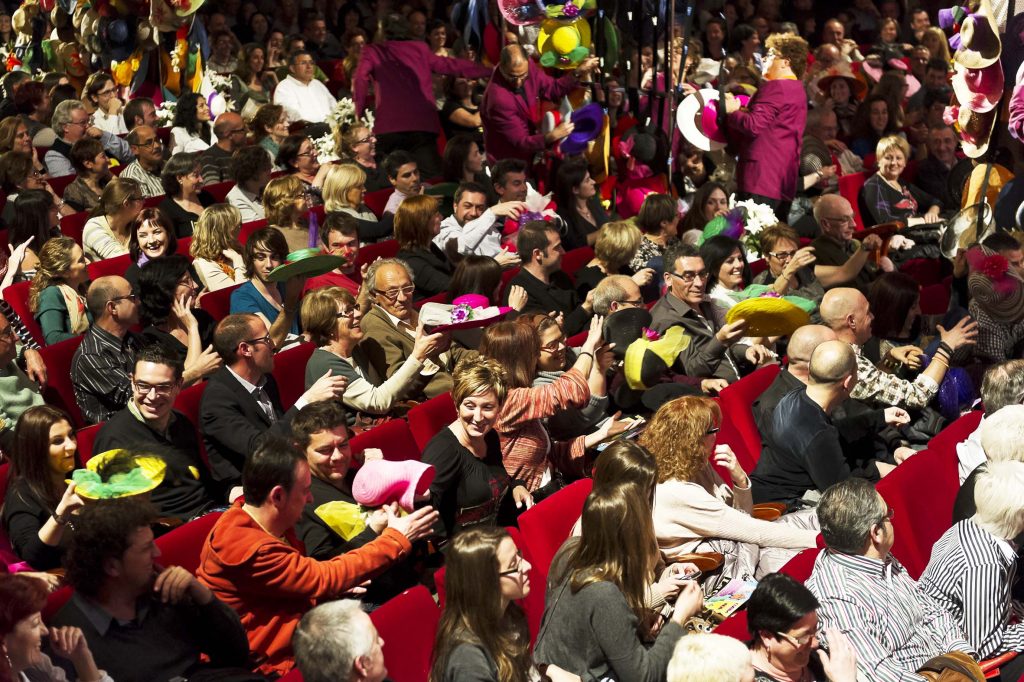 Do you know our graphic designer, Raúl Pascuali? No? Yes you do! Is the one who has made the posters and all the graphic design of our company since 1980! Do you remember the posters of Cubana’s Delikatessen, The Tempest, or the face of Cómeme, el Coco, Negro or the three-dimensional glasses from Blinded by love? ¿Or our Christmas cards among other things? Of course you know who we are talking about!

And now he has made this new poster for the show Gente Bien: El Musical (Wealthy People: The musical). What do you think? Do you like it? 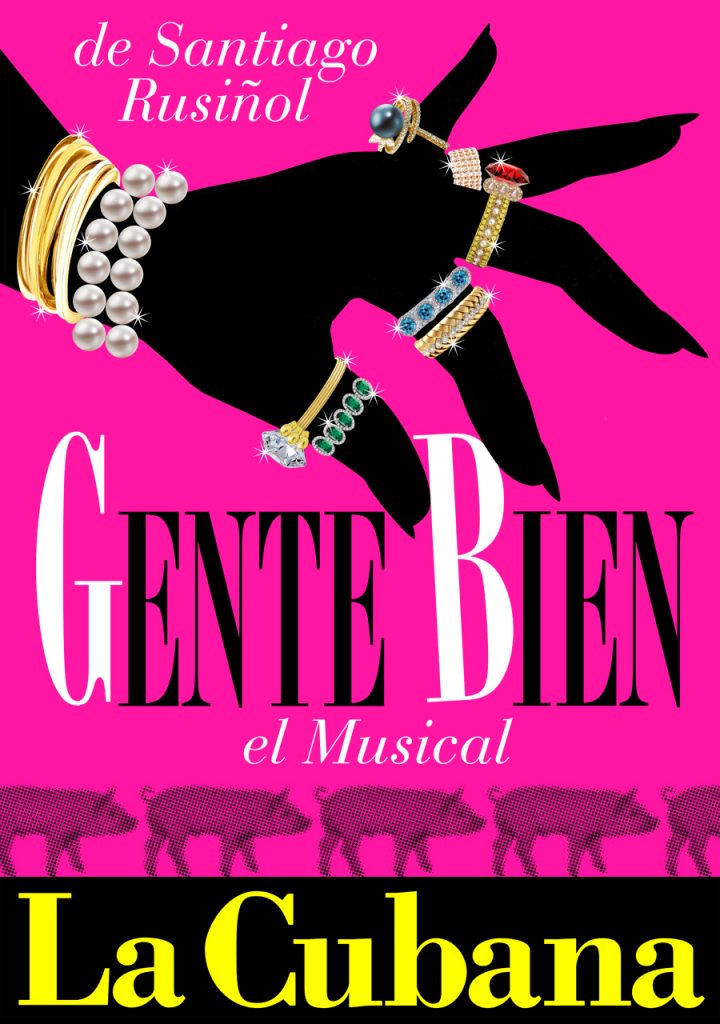 When we finished Wedding Chimes, our good consultants advised us to change our register, if we wanted to keep living doing theatre. The audience want something different: They want musicals!

“We do musicals!” we answered. “We dance and sing in all our shows”. “Brave is ignorance” they replied. “You used the art of hiding, but you cannot sing or dance. If you really on to be “on the crest of the wave”, you must prepare a musical!

“Let’s do it!” If we played with the follies world, the opera, the cinema, the television, we made theatre in the markets, we created dancing marathons, premieres, speeches… We have done almost everything! Of course we can do a musical!!!

We just needed to find a show similar to our style. ¿Mary Poppins? ¿The Sound of Music? ¿My fair Lady? And then we said: “No! Why don’t we make something from home? We are from Sitges, why don’t we make a Rusiñol play? Why don’t we make Gente Bien, a well-known farce for all Catalan amateur groups?”

Let’s do it! Next step was to adapt the original play and visit our composer, Joan Vives, to write the music for it. The final result is an operetta! A musical has born! And the rest… let’s see. Will we come forward? Will we know how to do it? Who knows? But we will make theatre for sure! 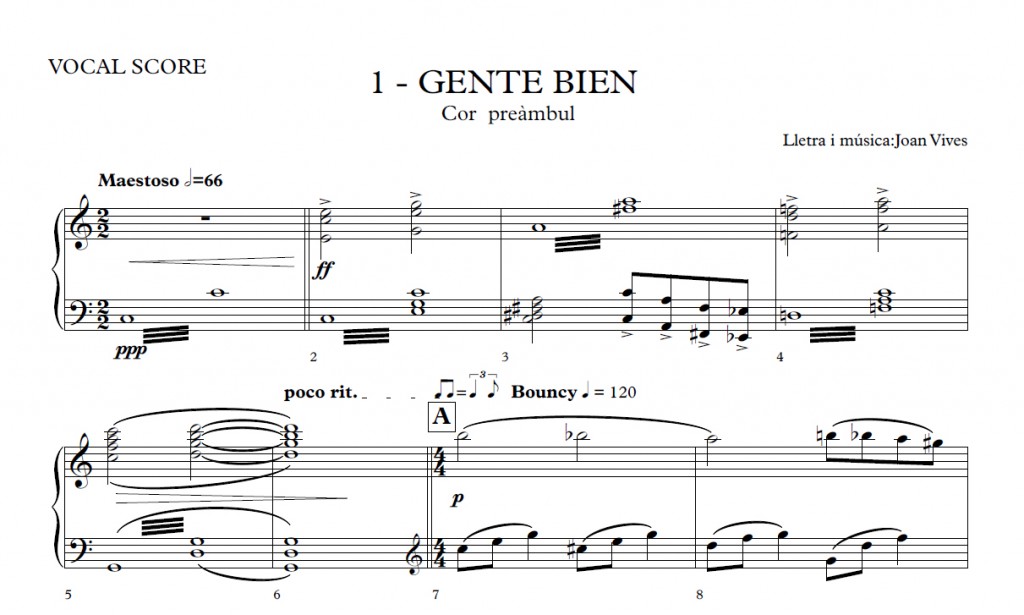 My 65 years old aunty, who is a “Teresina”, but she also is well learned in IT, came for lunch the other day and told us: “Boys! What and old website you have!” We answered: “What? We are very proud of our website, which we built a long time ago!” She replied: “You are wrong! You can’t open it if you are using an ipad or your mobile phone! It’s old and cheesy”.

We then went to consult with our friends, relatives and acquaintances, who are connected on the net all the time, and they told us aunty was right: The website had aged like us without realizing it! Despite out love for it, we have had to replace it.

The old and beloved old website is linked to the new one; and we can maintain it as a relic, like it is.

Here you have the new one that just went out from the oven! We hope you like it! Enjoy it! 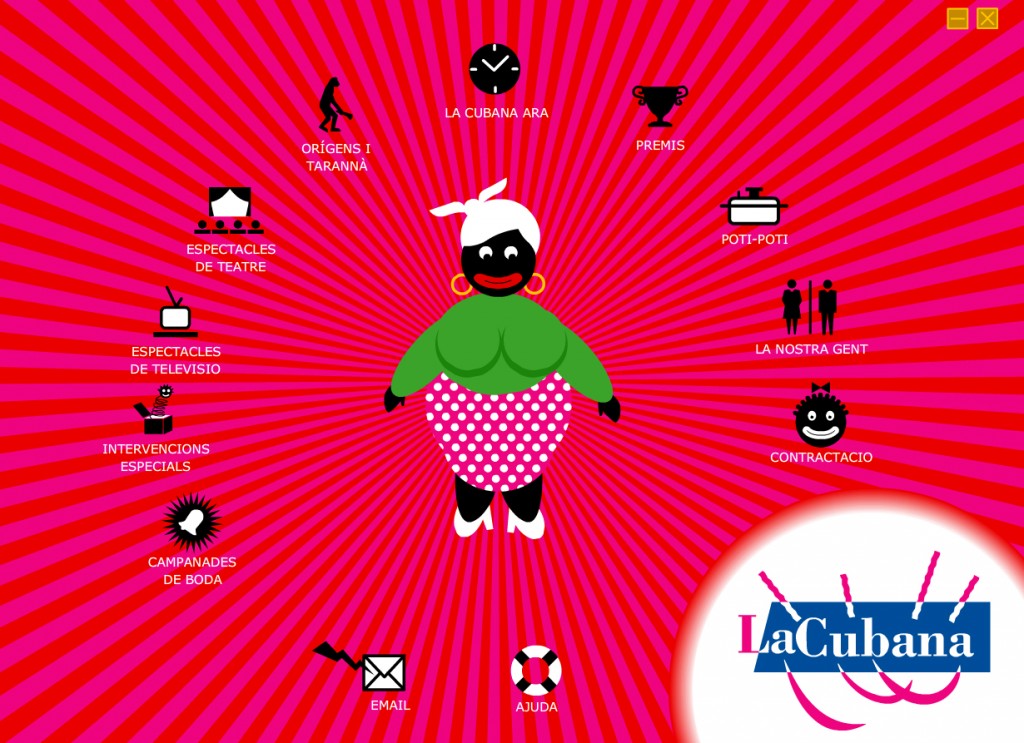